Five things to know about Kazakhstan, a former Soviet republic in the midst of an economic and diplomatic crisis

Kazakhstan, in the grip of riots that killed dozens of people, is a former Central Asian Soviet republic rich in natural resources but plagued by economic difficulties. Discover 5 facts about this state at the heart of the news. 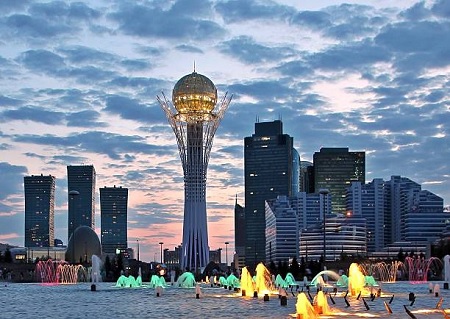 Gunshots erupted in central Kazakhstan's largest city, Almaty on Thursday, a Central Asian country shaken for several days by riots that have left dozens dead, according to an AFP journalist. Several gusts were heard at the end of the afternoon from the district of the town hall, which had been stormed Wednesday by hundreds of demonstrators. In addition, the police in Kazakhstan announced Thursday that they had arrested around 2,000 people in the streets of Almaty, shaken for two days by riots that have left dozens dead and a thousand injured. Almaty police officers left to clean the streets (...) In total, around 2,000 people were taken to the police stations, "said the Interior Ministry, quoted by the TASS and Ria Novosti agencies. Riots follow a rise in the price of gas in the country.

First secretary of the Kazakh Communist Party in 1989, Nursultan Nazarbayev retained, after the fall of the USSR, the head of this country where no election has ever been recognized as free and independent by international observers. The “Father of the Nation” (“Elbassy” in Kazakh) finally ceded the presidency in 2019 to a faithful, Kassym-Jomart Tokaïev, but this departure was more formal than real, as he retained a major influence. A cult of his personality was also established: the capital Astana was renamed Nur-Sultan, his first name, just after his departure from the presidency. It was the former president who had ordered in 1997 that the city of Astana , located in the middle of the steppes in the north of the country, becomes the new Kazakh capital at the expense of Almaty, which remains the largest city and the economic capital.

With more than 2.7 million square kilometers, Kazakhstan is the 9th largest country in the world, and the vast Kazakh steppes are home to the Baikonur Cosmodrome, operated by Russia. Six decades after taking off from its launch pad from Yuri Gagarin , it is the only launch pad to send missiles to the International Space Station (ISS).

Presence of a strong Russian minority

Proud of its history and nomadic traditions, Kazakhstan celebrated in 2015 the 550th anniversary of the first Kazakh state. Celebrations seen by experts as a response to Russian President Vladimir Putin's comments, who asserted that Kazakhstan had never been a state before its independence from Moscow in 1991.This nomadic territory was gradually conquered in the 18th and 19th centuries by the Russian Empire whose settlers founded Alma-Ata ( today Almaty). In 1936, the country had become one of the 15 federated republics of the USSR; although the Kazakhs represent nearly 70% of the roughly 18 million inhabitants, mostly Muslim, the country historically has a large Russian minority today. hui estimated at one fifth of the population (against more than 40% in the 1970s).

A country dependent on oil

As the largest economy in Central Asia, Kazakhstan has in the past been accustomed to double-digit growth rates. But the country has suffered since 2014 from the drop in hydrocarbon prices and the economic crisis in its Russian ally, which caused the devaluation of the Kazakh tenge and led to high inflation. Black gold represented 21% of gross domestic product ( Kazakhstani GDP) in 2020, according to the World Bank which forecasts economic growth of 3.7% this year.Among the main world producers of uranium (supplier of French atomic power plants), Kazakhstan is full of manganese, iron, chromium and coal. The country is also a stronghold for bitcoin mining. Dependent on the Chinese market to export its oil and gas, Kazakhstan boasts of being the "loop" in China's "Road and Belt Initiative", that is, the pharaonic Chinese "News" project. silk roads ".

Fed up with Borat!

Despite the millions of dollars invested to promote the image of this country rich in hydrocarbons, Kazakhstan is sometimes associated with the character of Borat, hero of the eponymous film by British actor Sacha Baron Cohen. Released in 2006, this mock parody documentary followed the trip to America of a fictional racist, rude and incestuous Kazakh. An image that did not please the authorities of the country.