Saudi Arabia no longer wants to sell its oil exclusively in dollars. China is about to get its petroyuan, further fragmenting the Western-dominated international monetary system. But what about petrobitcoin? 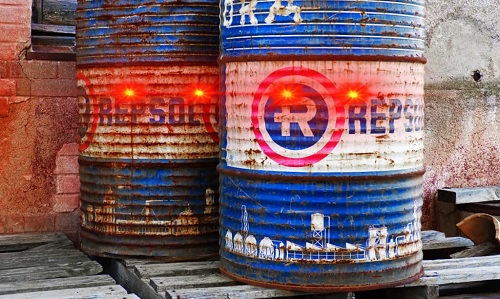 The short history of the petrodollar

Saudi Arabia, the world's second-largest oil producer, is in talks with China to sell its black gold in yuan rather than dollars, The Wall Street Journal reports . It would be a profound change in the oil market where 80% of sales are made in dollars, and 100% in the case of Saudi Arabia.

As a reminder, the petrodollar was born in 1975, four years after Nixon abandoned the Gold Standard (1971) to prevent the United States from losing all its gold. The United States had already lost half of it due to requests from Charles de Gaulle's France and other European countries to convert their dollars into the yellow metal.

These were geopolitically turbulent years. It coincided with the peak of conventional oil production in the United States (1971) and the Yom Kippur War (1973) which pitted Israel against an Arab coalition led by Syria, Egypt and Saudi Arabia.

It was at this time that Henry Kissinger devised a Machiavellian plan to save the dollar, which was beginning to seriously falter. Not only because of a negative trade balance, but also because of the expensive wars in Korea and Vietnam. This plan was simply to convince OPEC to sell its oil exclusively in dollars, which would greatly increase the demand for the dollar.

In this way, and despite the end of the Gold Standard, European ingrates would ultimately be forced to hoard dollars if they wanted to be able to afford oil, which is absolutely essential to any industrialized economy. He will be answered in 1975, but not without difficulties and perfidy...

He first began by convincing US President Nixon to align himself with European countries by intervening in the Yom Kippur War in favor of Israel. The aim was, among other things, to enrage the Arab countries which effectively ceased their oil exports to the West. This is the famous oil shock of 1973. In 1974, the price of a barrel had already quadrupled, going from 3 to 12 dollars. Between 1970 and 1980, the price of a barrel will end up being multiplied by 10.

At the same time, the United States will let the OPEC countries free themselves from the tutelage of European oil companies. Kissinger knew that the best way to weaken Europe was for Iraq, Iran, Kuwait, United Arab Emirates, Qatar and Libya to nationalize oil industries like British Petroleum , Royal Dutch-Shell (Netherlands). Bas) and the French Petroleum Company (ex-Total).

This tour de force was all the easier since Washington had pushed for the creation of OPEC in 1960. It was the very influential American journalist Wanda Jabloski, editor of the weekly review Petroleum Intelligence Weekly , who played the matchmaker between Saudi Arabia and Venezuela to found OPEC.

OPEC will see the light of day during the Baghdad Conference, mainly on the initiative of the Shah of Iran, a puppet installed by the United States following a plot orchestrated by the British and American secret services. The famous “ Ajax ” operation that Iran still has in mind…

This oil cartel allowed Arab nations to present a united front to nationalize European oil companies and drive up prices. This is exactly what Kissinger wanted to weaken Europe, which has very little oil, unlike the United States.

In the end, Kissinger will simply end up threatening Saudi Arabia to use force to remedy what he aptly calls "the strangulation of the industrialized world." The London Sunday Times newspaper even revealed in February 1975 the existence of the “ Dhahran Option Four ” plan which planned to invade Saudi Arabia to take possession of its oil wells.

King Faisal will hear these drum rolls very distinctly and, at the end of 1974, ends up hearing a proposal that is difficult to refuse. Kissinger promises him military protection against Israel, the unlimited sale of armaments and even a return of Israel to its 1948 borders.

In exchange for which Saudi Arabia had to commit to two things:

– Sell its oil EXCLUSIVELY in dollars;

– Invest its surplus dollars in the American debt (or buy armaments and other products made in America).

King Faisal resigned himself to cooperating in the face of fine promises vis-à-vis Israel, international pressure, threats of invasion and, above all, the simultaneous assassination of the two protagonists in the negotiations with the United States. Saudi Central Bank Governor Anwar Ali and Foreign Minister Omar Saqqaf were found dead in New York in Washington. Both were assassinated on the same day (November 14, 1974)…

Nevertheless, Kissinger's promise of Israel's return to its 1948 borders was just fluff. It was written in advance that the Saudi King Faisal ben Abdulaziz Al Saud would end up no longer selling his oil in dollars. Fortunately for Kissinger, “someone” decided to assassinate the king barely a month after he agreed to sell his oil in dollars.

This someone is his nephew Faisal ibn Musad. He assassinated his uncle on March 25, 1975, the anniversary of the birth of the Prophet Mohamed. However, it turns out that the regicide had been living in the United States for 10 years. According to an Executive Intelligence Review survey published on December 26, 1978, he was allegedly manipulated by a cabal mixing Zionists and the CIA...

The little history of petroyuan

This is how the petrodollar was born… But after 47 years of reign, we will now have to make way for the petroyuan. The offer is tempting for Saudi Arabia since Beijing launched its own oil benchmark in 2018, denominated in yuan and convertible into gold.

You read correctly, countries agreeing to sell their oil in yuan to China can exchange it for gold if they wish. In other words, the Gold Standard is back. This outcome was all the more predictable as China buys about a quarter of Riyadh's oil exports while the United States buys almost none . .

Let's not forget either that Joe Biden had pledged during his campaign to make Saudi Arabia the "  pariah that it is .  " for the murder of journalist Jamal Khashoggi in 2018. The American president had therefore logically refused to deal with directly with Crown Prince Mohammed bin Salman. Problem, the latter remained the strong man of the country and recently rejected a phone call from the American president, according to the WSJ…

A dubbing of the yuan would send a strong signal to the rest of the world. The timing of this announcement is not insignificant and we feel that the war started by Russia is the beginning of a global rebellion against the West.

Russia is far from being isolated, contrary to what some would have us believe. Apart from the EU, Japan and the United States, only a handful of countries have so far agreed to participate in the sanctions (Singapore, South Korea, Taiwan, Canada).

The President of Pakistan probably spoke on behalf of many countries when he declared that he was not “the slaves of the West” after the EU asked him to condemn the Russian invasion. Even New Delhi jumped on the bandwagon, saying it was ready to stop paying for Russian oil in dollars. As well as Turkey which proposes to trade in gold.

Even better, the Eurasian Economic Union (Russia, Kazakhstan, Kyrgyzstan, Belarus and Armenia) and China agreed last Friday to use a monetary system independent of the dollar. The journalist Pepe Escobar reports in this article that "this Eurasian system will be based on 'a new international currency' whose value will depend on a basket of national currencies of the participating countries (with the yuan as reference currency) as well as on the prices of raw materials ".

“This system is set to become a serious alternative to the US dollar, as it could attract not only nations that have joined the Belt and Road project, but also major players in the Shanghai Cooperation Organization (SCO) as well as ASEAN, Iran, Iraq, Syria and even Lebanon. »

Vladimir Putin also stepped up to the plate by saying that “the actions of the West have shown that gold and foreign exchange reserves can simply be stolen” . Russian Foreign Minister Lavrov said for his part that “the current situation is historic, a '  battle  ' is underway to determine what the world order will look like. ".

Nations must emancipate themselves from the Western monetary system and bitcoin appears to be a pacifist solution with the merit of running like a Swiss clock for many years now. The yuan will certainly do well, but remember that it only represents 2.5% of global foreign exchange reserves. Could this lack of love be due to the fact that China is a totalitarian state?