"  A DAO is forming in the specific case of MetaMask  ," said Joseph Lubin, the CEO of ConsenSys, who is the spokesperson for the wallet. "  It won't govern MetaMask, but it will fund the creation of new unreleased MetaMask tracks  ." It was during an interview that Lubin confirmed that MetaMask intends to launch a token. 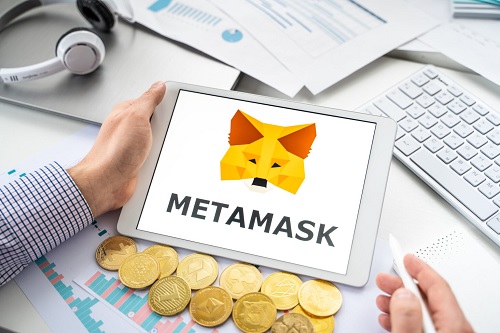 A rumor confirmed by Lubin

There are no details on what type of mechanism they intend to use, but it would be one of the biggest airdrops we've seen so far with MetaMask already over 30 million users.

Today, MetaMask earns around $1 million a day from exchange fees. This is a feature by which MetaMask acts as an aggregator of Defi platforms like Uniswap or Sushiswap and tries to get the best conversion deal for users, keeping a commission for itself.

It also has fiat-to-cryptocurrency conversion partners that likely bring it additional revenue.

That would equal half the valuation of ConsenSys which just raised $450 million, from Microsoft and others, for a $7 billion valuation. However, rumors have swirled that part of MetaMask's capital has been quietly sold to JP Morgan, with shareholders now trying to cancel this speculative transaction. The launch of a token would put an end to these rumors, as the browser wallet would become a public platform where users would decide, for example, whether to ban IPs from Russia or other countries.

But while the rumors continue and escalate, details on a token's launch date remain very scarce.

MetaMask, from wallet to token

Metamask is one of the most popular web 3.0 wallets . It is set up by the technology company Consensys which offers blockchain software, such as the MetaMask. The latter comes in the form of an existing crypto wallet in the form of an extension for a browser. First ubiquitous in the use of different DeFi protocols, MetaMask quickly became the wallet of choice for the NFT community on the Ethereum network.

It is a non-custodial wallet, that is to say that each user has a unique key that he is the only one to use. It allows the use of the Ethereum network as well as its various cryptocurrencies, but also its smart contracts.

While DeFi has flourished over the past two years, the NFT ecosystem has experienced phenomenal growth in 2021. These two universes being mainly linked to the MetaMask wallet, the latter has experienced a sharp increase in its number of users to exceed the 30 million monthly active users.

Simply put, MetaMask brings together all the necessary elements to ensure the success of its eventual token. We know that we are more at the rumor stage, since Lubin himself confirmed it. It remains to be seen, however, whether in what time frame this token will be made available to the public.