AFTER REXEL, SOPRA STERIA WARNS THAT ITS FINANCIAL TARGETS FOR 2021 WILL BE EXCEEDED 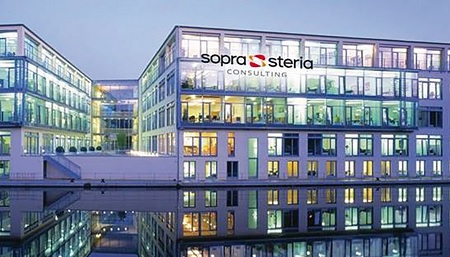 Sopra Steria largely takes the lead of SBF 120 Thursday morning while the group announced that its annual results, scheduled for February 24, would show a large exceedance of the 2021 objectives. At the same time, Cyril Malargé will take charge the management of the company, the current CEO can no longer perform his duties.

While American banks enter the competition this week, the annual results season is still starting timidly in France, before accelerating from February 1 and the publication of LVMH in particular. However, the first indications provided by the French groups as to their level of activity are positive at this stage. Following a further upward revision of Rexel's annual outlook , it is Sopra Steria's turn to announce that it has exceeded its objectives.

The consulting company in digital transformation of companies, which will unveil its annual accounts on February 24, indicates that its "annual objectives will be largely achieved, current estimates confirming the sharp rebound in operational performance in 2021".

Sopra Steria now expects to deliver organic growth in turnover of between 6.3% and 6.4%, against a previous objective of “greater than or equal to 6%”. The operating margin on business activity is estimated to have increased by more than one point to 8.1%, against a previous guidance of between 7.7% and 8%). With 46,000 employees, the group generated 4.3 billion euros in revenue in 2020.

Mechanically, Sopra Steria is reviewing its estimate of free cash flow from an initial target of "150 to 200 million" to "over 250 million", a "cash performance" that the group describes as "very solid".

As a reminder, despite the context deemed "difficult" by Sopra Steria in 2020, which resulted in an organic decline of 4.8% in its revenues, the decrease in the operating margin on business activity had been imitated at 1 point (at 7.0%) and free cash flow remained "very strong" at 203.5 million euros.

In a press release published on Wednesday after the closing, Sopra Steria also announces that its board of directors, chaired by Pierre Pasquier, has decided to appoint Cyril Malargé to succeed Vincent Paris as CEO, the latter, appointed in 2015, having "wished to be relieved, for personal and family reasons, of his functions". Cyril Malagré, who has already been managing the group's operations as Chief Operating Officer (COO) for 18 months, will succeed him as of March 1, 2022. Vincent Paris will however continue to support Sopra Steria as an advisor to the chairman. precise.

"The Board of Directors and I would like to express our sincere thanks to Vincent Paris who, for more than thirty years and in particular as Chief Executive Officer he has held since 2015, has contributed to the success and transformation of our group. "comments Pierre Pasquier, who adds that" the first estimates of a rebound in results in 2021 confirm it ". The one who will soon be the former boss of Sopra Steria, for his part, says he is "happy to pass the torch on to Cyril Malargé", who will, according to him, be able to "take the group to new heights". The latter, who also pays tribute to Vincent Paris, affirms that he is fully mobilized to pursue the group's strategy in order to "achieve the objectives that we have set for ourselves".

On the stock market, this double announcement is warmly welcomed by investors, the Sopra Steria share dominating head and shoulders above a list of SBF 120 without large variations, the market giving itself a breath after two sessions of increase and pending kick off the results season. At around 10:35 am, the share of the group born from the merger of Sopra and Steria (two ESNs) in 2015 took off 6.4% to 165 euros, a high since November 23.